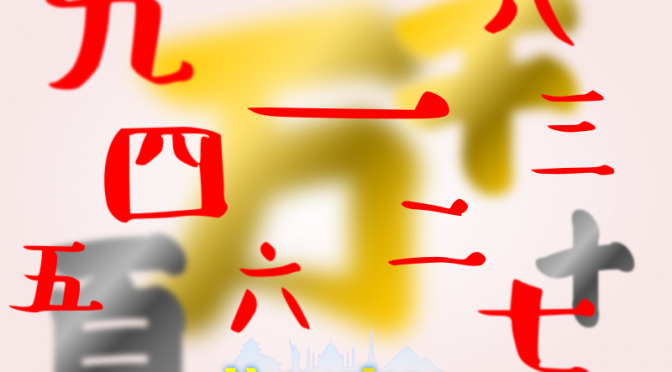 In today’s lesson we are going to discover numbers in Japanese. Once again a subject not as simple as it may seem. Let’s go!

In Japanese, numbers are either written using kanji (refer to The Japanese Writing System for a quick introduction on kanji if you don’t know what it is) or Hindu-Arabic numerals (0, 1, 2…). Both systems are frequently used, therefore learning the kanji version is a must but as you will see in the next chapter these kanji are quite easy to learn.

One other important fact to know about numbers in Japanese is that there is not one, but two ways of pronouncing them: The first one is an heritage from the ancient Japanese language (kun-yomi) and is used generally to count things, people… and the other one was unherited from the Chinese (on-yomi) and is used to count, express order in maths…

Let’s have a look at the numbers from 0 to 10. The table below provides the Hindu-Arabic numeral, its kanji version, and both pronounciations.

Kun-yomi is mostly used for numbers from 1 to 10, and a few other exceptions. For other numbers Japanese people switch back to using on-yomi.

A few notes also regarding the pronouciation:

From 10 to Infinity, and Beyond

Numbers above 10 are simply built by stacking quantities of different place names (tens, hundreds…), like in English, with step changes every 10,000.

The table below presents the place names that are the most often encountered:

Quite easy isn’t it. Well in fact not as much as it should, because the pronounciation of place names or numbers have some irregularities that I will present in the following tables:

There is no utter complexity in all of this, but you have to get the reflex that generally numbers build around figures 1, 3, 6 and 8 in the Sino Japanese system have some irregularities.

Then, once these rules are mastered, building numbers is straightforward ^^

Here we are for this first part of the lesson. In the next part we will focus on the use of the Japanese numbering system and see how we can count different things.

Do not hesitate to share if you liked this article.