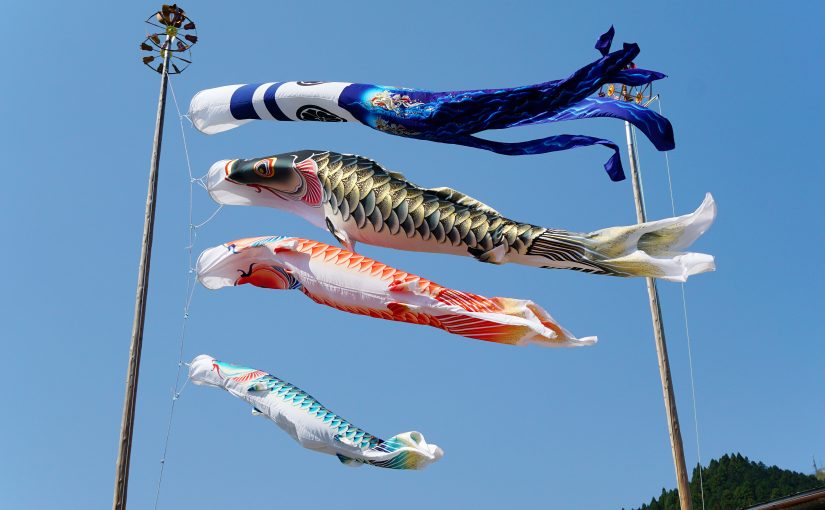 Hello!
Have you ever wondered what were these fish shaped streamer that can be seen from time to time in Japan? Find the answer here!
So, that pole, with fish streamers, is called 鯉幟 or 鯉のぼり (こい のぼり – koi nobori – /carp/flag, streamer/).

The history of the 鯉のぼりstarted back in the Heian period (between 794 and 1185) where a のぼり (nobori – flag or banner) topped with a small flag called 招代 (おぎしろ – ogishiro) was displayed by the samurais at the entrance of their residence for the 端午の節句 (たんご の せっく – tango no sekku – Boy’s Day Celebration) on the 5th day of the 5th lunar month, where boys were receiving their first pieces of armour.
The tradition was then progressively adopted by townspeople and evolved during the Edo period (between 1600 and 1868) when it is said a merchant replaced the 招代 (the small flag) with a carp streamer. That carp streamer was a representation of a scene from the Chinese mythology depicting carps going upstream the Yellow River to jump over the Dragon Gate 龙门 (longmen (Chinese)) in the attempt of becoming dragons and which was (and is still) a symbol of how perseverance can lead to great achievements. 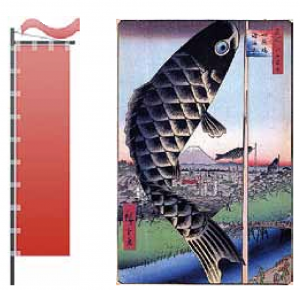 This tradition is continuing nowadays on the 5th day of the 5th month of the Gregorian calendar, therefore the 5th of May, and has become 子供の日 (こども の ひ – kodomo no hi – /children/(relation)/day/ – Children’s Day) in 1948 to also account for other children in the family.

Looking more carefully at the 鯉のぼり, we can see different elements. 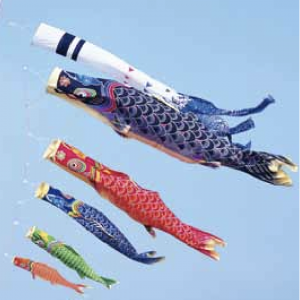 At the top, we have a streamer which represents the river and its waves, called 清海波 (せいがいは – sēgaiha – wave pattern).
Below that river, we have nowadays:
– A black carp streamer representing the father of the household,
– A scarlet/red carp streamer representing the mother of the household,
– One or more blue and other colour carp streamers representing the children of the household.
The black carp streamer, called 真鯉 (まごい – magoi – true carp), was the only carp streamer on the 鯉のぼり up to the mid of the Meiji period (between 1968 and 1912) and initially represented the eldest son,
The scarlet carp streamer, called 緋鯉 (ひごい – higoi – scarlet carp), was introduced during the Meiji period. At that time it appeared the father was the pillar of the family and was to be taken as an example by the eldest son who was to take over his charge. Therefore the black carp streamer became a representation of the father, and the scarlet carp a representation of the eldest son following the example of his father.
The blue carp was then introduced in the mid of the Showa period (between 1926 and 1989) where the 緋鯉 (scarlet carp 😉 ) when the scarlet carp became a representation of the mother as women took a more preponderant position in the Japanese system following WWII, and a new streamer was needed to represent the eldest son of the family.
Following this latest change, quickly it became frequent to find more than 3 carp streamers as the 鯉のぼり tended to picture the whole family with younger sons and daughters, and with it came the introduction of new colours like green, pink or orange for the carp streamers.
The carp streamers themselves were initially made of paper, but nowadays they are made of fabric for the most part.
Some additional ornaments were also added here and there on the 鯉のぼり, as well as other genres of fishes.
You know quite everything on that topic now!
So happy Children’s Day!
See you,
Stéphane
Credits:
– Feature image: @yukihide810511
– Other images: 工業－繊維製品－ 岡崎信用金庫、2019年12月15日閲覧。
Sources:
– Wikipedia
– 工業－繊維製品－ 岡崎信用金庫、2019年12月15日閲覧。
Follow us:
Share this: