Here is a new series of articles where we are going to study verbs in Japanese. In this introductory lesson you will discover verb stems as well as the verbs plain and -ます forms. Let’s go! 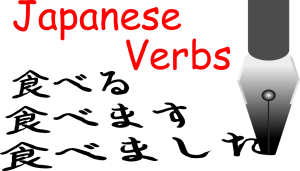 In Japanese, a verb consists in:

Let’s have a look at the following verb in different conjugated forms:

Based on the definitions above, try to identify the stem of the verb, and the form suffixes.

Did you find the correct answer? If not, don’t worry. Look carefully at the definitions and the expected answer to see the logic behind it. It may not be straightforward but you will make it with a little practice.

Japanese verbs are classified into 3 groups. Knowing the group of a verb is important as it will condition the way the stem gets declined during conjugation.

Before we see the group definitions though, note the following points:

Here are the definitions of the 3 groups:

The dictionary form of these verbs ends in either ・い.る or ・え.る, but pay attention: not all verbs ending with ・い.る or ・え.る are Type II verbs. The stem declination is the same for all the verbs in this group.

This is the group of the irregular verbs; but don’t worry there is only two of them: 来る (く.る) / to come / and す.る / to do /. The declination of the stem of these verbs is specific and we will see it case by case.

This group encompasses all the other verbs: the ones that end in either ・い.る or ・え.る but are not type II verbs, and all other ・う dictionary forms (.す, .ぐ, ・あ.る…). We will see in the next chapter that the stem of the verbs in this category can have 5 different declinations, each corresponding to one of the 5 Japanese vowels.

One special note also for the です, which is a contracted form which origin is unsure but basically has the meaning of / to be / and is assimilated to the English copula “is”. This copula has a specific  conjugation even though it isn’t assimilated as an irregular verb.

Let’s give this some practice: Using the rules above, try to find the group of the following verbs at their dictionary forms.

The table below shows how to build the different stem declinations for Type I and Type II verbs.

*For Type II verbs’ stem in あ and え, the exact declination depends on the verbal form.

Try it yourself with はな.す and かえ.る which we saw earlier…

Quite easy, isn’t it?

Note that you don’t have to know perfectly this table for the moment, I will make references to it all along our lessons around verbs and you will come to learn it little by little.

The plain form of a verb is in fact what we saw earlier as the dictionary form. Indeed, the notion of infinitive does not exist in the Japanese language, all the conjugation rules are based on an already conjugated form.

Therefore, the plain form is used:

Casual speach is to be used with close acquaintances or people you show despise to.

Stem in う of the verb.

In the Japanese language, a verb can be used alone to form a sentence if the context alows it, and pronouns are scarcely used.

Therefore if someones calls you on the phone while you are eating and asks you what you are doing, you can simply answer:

But remember this is plain/casual language and therefore that it may sound gross to many Japanese people. You should generally prefer the use of the -ます form that we are going to see now.

As you may have spotted, the plain form is used for both present and future tenses. This is because in Japanese the notion of future tense does not exist. To express future, Japanese use temporal expressions (tomorrow, in 10 days…) plus the present tense. This is somehow like saying: “Tomorrow I go to swimming pool.” instead of the proper English version: “Tomorrow I will go to the swimming pool.”.

The -ます form is used for:

This form is the one to be favored when you don’t really know if you should be casual or polite with someone.

Conjugate the following verbs at the -ます form (remember that the given stem declination is the stem in う).

Here it is for this lesson. Do not hesitate to comment and ask questions if you have any, either on the blog or on social media: