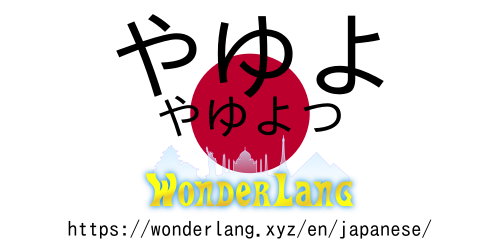 Today we will only see three hiragana: や, ゆ and よ, and the halfwidth hiragana ゃ, ゅ, ょ and っ!

Do you see how each of the following characters looks like?

If not, refer to our previous lessons.

Now, get your paper and pencil ready!

This hiragana is pronounced: [ya] This hiragana is pronounced: [yu]

This hiragana is pronounced: [yo]

One specificity of the hiragana や, ゆ, よ and also つ is that there exist a smaller version of each these characters: しゃ, にゅ, きょ, くって.

The small っ on its side has for effect to make the first letter of the following syllable being slightly repeated (for consonants starting with either the sound k, t, ch or p) or sounding longer (when the consonant starts with s or sh – refer to A step further with hiragana and katakana for more details).

Here it is for today. See you soon for five new characters!